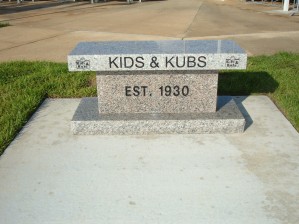 The idea of a monument dedicated to the Kids and Kubs Softball Club originated with player-member Richard Morris. He had seen such a object elsewhere and became enthused with having some place for future members to have as their own for picture taking and reminiscing, and to memorialize all those who have been members before, and to inspire those who will be members later.

The committee to investigate the purchase and placing of a monument under the leadership of Dick Morris included the then-current officers, Winchell Smith, Menno DiLiberto, Bob Warsaw and Fred Cardella. The committee considered several types of monuments and consulted four different providers before deciding on a polished granite bench designed and produced by Sumner Marble & Granite Works of St. Petersburg. The front and back seat edges carry the club logo and the words “Kids and Kubs”. The upright support indicates the club was formed in 1930.

The upright portion supporting the seat contains four drilled cores 5 inches in diameter and 9 inches deep. They contain sealed containers of documents, pictures and electronic data in the form of a time-capsule. The monument is placed during the 75th year of the club’s existence and it is expected that the capsule will be opened at a ceremony in the year 2030 during the 100th anniversary of the club. See Album 1 for a picture of the time-capsules being sealed into the monument.

The cost of the monument was $1800. An original donation in support of the idea was made by Mr. Galbraith, a friend of Mr. and Mrs. Morris. The balance was oversubscribed by members of the club, leaving about $650 in a fund to maintain and care for the monument.

The containers used for the time-capsule are made of polyvinyl chloride (PVC) pipe with plastic end caps. The contents are wrapped in aluminum foil in an attempt to preserve the documents against the ravages of time and moisture. After capping the cylinders and as a further barrier against moisture, they were coated with fiberglass before being placed in the monument. The contractor then sealed the seat to the support with an epoxy material especially made for joining granite surfaces. It will require some expertise to break the seal at the time of opening the time-capsule.

A ceremony to dedicate the monument took place on November 19, 2005. In attendance was the mayor of St. Petersburg, Rick Baker, members of involved departments of city government and other invited guests. Mayor Baker has provided the club with a letter to the mayor of the city in the year 2030 conveying the best wishes of the present administration to the future one to support the Kids and Kubs as they start their second century of play. He also indicated that he expects to be a playing member and president of the club at that time!